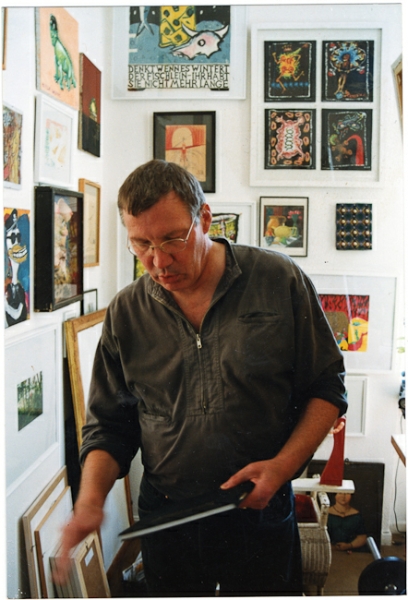 Hallmann studied from 1957 to 1958 at the Academy of Fine Arts in Dusseldorf. From 1958 to 1960 he completed a painting apprenticeship in Emsdetten to continue from 1960 to 1965 his art studies at the Academy of Fine Arts in Nuremberg under Prof. Fritz Griebel. In Nuremberg, he was a member of the artist trio around Herbert Haberl and Bernd Wangerin. In 1965 he was a founding member of a traveling theater, the later “Hoffmann’s Comic-Theatre”. Some members of that group later formed the rock band Ton Steine Scherben.
From 1967 to 1969 Hallmann lived in the United States. In 1968 he taught at the University of California in San Francisco. After a stay in a psychiatric hospital in 1969 he destroyed in 1970 his entire artwork accessible to him. From 1992 to 1995 Hallmann had a professorship at the Braunschweig University of Art. He has lived in Windsbach since 1994.

Blalla W. Hallmann’s work explores in a drastic, both blasphemous and obscene manner, basic existential issues (religion, sexuality…). Formally, it ranges between surrealism, outsider art (Art Brut), folk art and numerous allusions to art history. In the 1980s the cycle of „horror pictures“ emerged, that addresses, among other things, Inquisition and the Holocaust. Along with other techniques characteristic of him is painting behind glass, known from the folk art.